the 101 project is well under way now with boards being completed all the time. This post is about Flash Gordon.

Flash Gordon began life as comic book in the 1930s, designed to compete with Buck Rogers. A tale of Earth under threat and a mad scientist who makes a rocket ship to go and save humanity from disaster; Flash Gordon is caught up in the whole affair after being weirdly kidnapped alongside his companion Dale Arden.

Often mistaken for being the same person as ‘The Flash’ from DC comics, Flash Gordon did not have super powers but was tall and strong, an alumni of the Yale Polo team. 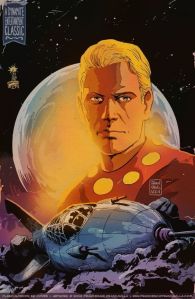 A number of film versions were planned in the 1970s with various directors trying to buy the rights. Most notably, George Lucas failed and made Star Wars instead. The 1980 film version is still in my top 10 movies, the Queen soundtrack alone makes it a classic. The characters and storyline are close to the original comics although Flash plays for the Jets rather than being a polo player. Max Von Sydow’s portrayal of Ming the Merciless is one of my childhood’s fondest memories alongside the Daleks and Cybermen of Doctor Who. Brian Blessed shot to fame after playing Prince Vultan and the most requoted line of his career comes from this film…

This site uses Akismet to reduce spam. Learn how your comment data is processed.